I don’t know about you, but I personally think emoji are kind of dumb. However, that’s just one outlaw’s opinion on the matter. Here at the CleverFunnel homestead, we like to joke that emoji are the performance enhancement pills err… weight gain pills of subject lines. They are a quick and easy way to add extra content to a subject line. But, do they actually work? The answer is both yes and no.

The truth in these parts is that emoji lay in the realm of either skeezy spammers trying to sell you sex with very bad spelling and grammar, or they are used by lazy millennials, youngsters, and hipsters trying to look cool. This is not to say that emoji are all bad – they’re not. It’s just that people, and especially businesses, tend to use them incorrectly.

Emoji are increasingly replacing entire words on phones, messaging clients and other chat apps, mostly via auto-correct. The first few times I noticed my phone doing this, it caught me by annoying surprise, because I like to spell out my thoughts, not narrate my conversation like a children’s picture book.  ❤️

In reality, emoji are just the digital version of D-List celebrity Bieber look-a-likes.

In our experience, it really depends on who your target audience is. You’re not going to have much success using emoji in emails meant for financial professionals. However, you could include them if you’re sending messaging from a restaurant or something in the B2C space. ️✈️

There’s Data in Them There Hills

As we love to do at the CleverFunnel homestead, we put aside our preconceived notions about emoji, and sought out cold, hard data.

We put emoji to the test in our latest email subject lines to see which one gets more opens. This is what came of such things: 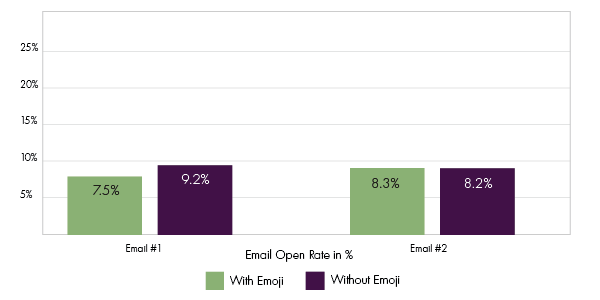 Using these two tests we cannot definitively say one way or the other that using emoji in subject lines will produce more open rates. So far, it’s kind of a mixed bag. We will have to conduct more tests and send more emails. But as marketers, this shouldn’t take too long. The more tests we run, the better.

As I mentioned several other times, emoji in subject lines work differently for different audiences and industries, so we invite you to do your own tests. For our B2B SaaS marketing world, they are a mixed bag. One one hand, they are fun to use every now and then and can get some decent results. On the other hand, we’re not going to be sending  every time we want to send out some newsletter or feature update. We’re also definitely not going to be adding emoji to emails for our clients in the financial sector. In some spaces, emoji are just unprofessional, where clear and targeted messaging works best. However, if we’re sending out food-related messaging for our other clients, a  ️ emoji will probably be fine, especially if the audience will be more B2C than B2B.

What good is having a test for 1 audience in a few emails? If I know myself (and I’d like to think I do), I’ll open a GrubHub email with a tasty piece of cake in the subject in a heartbeat — especially if I’m craving a no-longer-in-production Unicorn Frappuccino.

Chris is the CEO CleverFunnel CBD. He likes to be outside and to spend time with his friends and family. It’s a bonus if he can do those two things together.
