If you already know what I’m referencing, you’re probably thinking, “Hey, that’s not what that’s for!”. We’re talking about the new settings in Facebook that allow you to spy on your competitor’s Facebook ads, err — see what ads are running on business pages.

For those of you that haven’t heard, Facebook has increased the level of transparency across the platform, meaning anyone — yes, anyone — can see the ads a page is currently running. This wasn’t particularly done to “Spy” on your competitors, but hey, it works for that too. Here’s how espionage can happen:

Now, if spying on your competitor’s Facebook ads wasn’t exciting enough, Twitter has also introduced a similar “Twitter Ads Transparency Center.” It does pretty much the same thing as Facebook, and lets users see promoted tweets of advertisers.

Now, to be honest, this doesn’t excite us too much at CleverFunnel because we’ve never been too keen on taking a mediocre strategy from a competitor. However, not a day goes by that one of clients doesn’t send us a screenshot of a competitor’s ad asking why we aren’t doing that exact thing. I won’t get into the details on why doing the same exact thing as your competitor is dumb (even if they are significantly bigger than you), but I’ll just say this: you’d better be unique (especially if you’re smaller), or you’ll get swallowed up in the noise and they’ll beat you on the budget game every time.

If you’re doing your marketing strategy right, you should have done a SWOT analysis on your competitors and have a pretty good idea of not only their strong suits are, but how you compare to them to position yourself against them. With that, hopefully, nothing you see in their ads will really shock you as to what they’re doing. Sometimes, however, it is nice to compare your work to your direct competitors and revel in the beauty that is your own genius over theirs!

It’s also pertinent to mention that it’s not a comprehensive list of the ads and for anyone doing any Facebook ad strategy beyond Marketing 101, you will have custom audiences and specific targeting that will not show in this view of the ads. At CleverFunnel, we run dynamic, multi-variant ad set that can have over 100+ variations each time and in different layouts. This level of detail will also not be displayed.

As with any and all ad sets, the advertiser is responsible for being up to date on the advertiser policies. As a refresher, here are the Facebook ad policies and Twitter ad policies so we’re all playing by the rules. Keep in mind, as people become more and more aware of the data Facebook has, mostly recently brought to light by the Cambridge Analytica scandal, these policies will change and users will likely have more and more access to the types. In the vein of transparency, there has been an option on Facebook ads to let users know why they are seeing ads and also to adjust your own settings of what Facebook “knows” about you so the ads you see are more relevant to you. 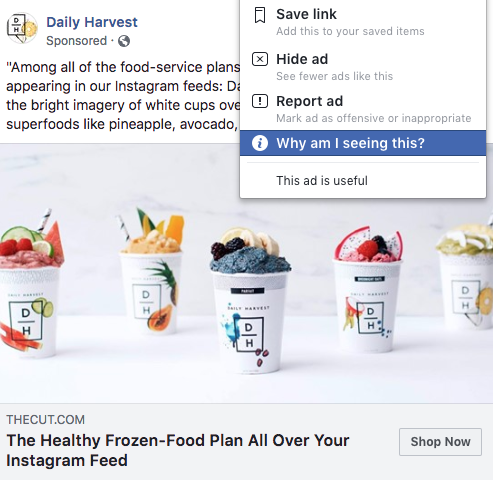 Finally, you will see an option to report the ad. I hesitate to even mention this as I see the devious eyes shifting back and forth thinking they’re really going to pull one over and ruin their competitor by falsely flagging an ad. Don’t do it. You’re not sneaky. It won’t work and you’ll be swimming in negative karma points for years.

So, what do we suggest you do with this newfound wealth of knowledge? Just like any of the other tools to spy on your competitor’s Facebook ads like Moat or AdFox, use it as (un)inspiration, but not direction. It’s easy to get shiny object syndrome, especially when you’re trying to take down a supergiant in an industry, but I caution you to stay your course and stick to your unique offering and your accompanying marketing plan. It’ll pay off in the end.