7 Startup Lessons To Learn From The 21st Amendment

What was once called the great experiment, turned out to be a great flop. Prohibition was intended to free society of the evils of drinking and fix the issues plaguing the once great American freedom land. And, it was a noble cause. As the freedom land got one of its greatest freedoms taken away, it quickly became evident that the American way of life was too invested in alcohol and after a little over a decade on December 5, 1933, the biggest ooopsie-daisy in American history was finally undone. 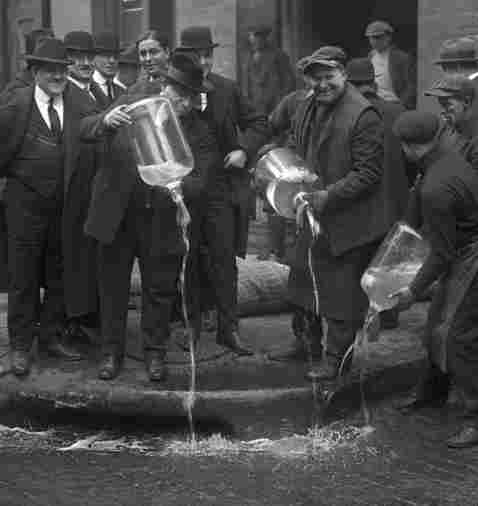 The biggest party foul the nation has ever seen.

Today we look back and laugh at the failure that was prohibition and we imbibe in honor of our fellow Americans that “went sober” for 13 years. Now we’re left with the glamorous images of the Roaring Twenties, speakeasies, bathtub gin, flappers, gangsters, and rum runners that still glimmer as a fun part of our history.

So, always looking to put our heads together and learn from the mistakes of others to save ourselves from startup self- sabotage, here are 7 lessons from the CleverFunnel team.

Lisa – Startup Lesson #1 – Accept your failures and learn from them. Boy this a hard one to learn. No one likes to admit they are wrong, they did something unfavorable, they had a bad idea and worse yet that they led an entire nation to shift their moral notions and give up the giggle juice for 13 looong years. As business owners, we know we are always right (right?). This is often times the fatal flaw that takes a great business idea and runs it right into the ground with a detrimental amount of arrogance. We see this time and time again with trying to force a product market fit for a startup and specifically in product-first startups trying to make marketing campaigns. People are hell bent they have the right creative, copy, landing page, webinar, whatever it is, there is no objective measure to determine efficacy and they so badly want it to work, they’ll manipulate the data to tell their story and support the product they’ve built. Stawp! Use objective measures (READ: data-validated) to determine viability for your startup and when something fails, accept it, analyze it and move on. Celebrate failures and successes equally — even if it means owning up to doing something wrong.

Chris – Startup Lesson #2 – Cut your losses. Piggy-backing off lesson #1… 13 years is a LONG time to hold onto a failed “experiment”. Too long, imo. For companies, that is about four times the amount of time before they typically run out of time, money (usually both) and have to close up shop. When it comes to startup marketing we have extremely limited budgets and limited timeframes. You have to walk a fine line of putting in enough effort and time to determine if your business idea, product, campaign or otherwise is just not feasible. How’d they determine this(finally!) for the 18th Amendment? Luckily, within a few short years they began to see the detrimental impact it was having on the entire nation, quantifiably so. Unluckily for them… uh, amendments are permanent, or so they were…. This wasn’t an easy process to undo and the only time an Amendment has ever been repealed. So, for businesses, get your fingers ready on the proverbial CTRL X and cut your losses before they get out of control. Now if you’ll excuse me, I have to go see a man about a dog…

Mika – Startup Lesson #3 – Evolve and innovate… or die. If we break it down, prohibition was a chance for the Buzz Killingtons of the world to bring everyone else down… manufacturing and distributing alcohol was illegal, along with the equipment to make it, so most peoples only option was moonshine brewed in secret, mobile, or sneaky equipment (ok… bathtubs). America’s booze tasted like garbage, but we’re innovators, by God, and nobody can keep us from getting zozzled! So, in the time of prohibition, many breweries, bars and distilleries perished taking the pre-prohibition count from some 2,000 distilleries, over 4,000 breweries, to just a few producers of each left in the entire country. So how did some of them survive? They made lemonade out of lemons. Here are a few clever ways they beat the system.

“By making so-called non-alcoholic beer with just a hint of alcohol in it” and “By turning whiskey into a doctor-dispensed pharmaceutical”. By making intoxication a part of protected religious beliefs and of course, the some assembly required method “”just-add-water” wine. Which brings us to our next point… 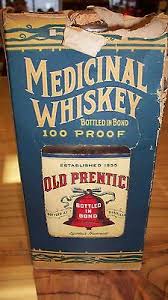 Mika – Startup Lesson # 4 – Know your audience. While the idea of mixed drinks was, by no means, invented during prohibition, a range of fun and iconic cocktails did spring up during the era. Savvy bartenders knew one of the fundamental successes of marketing: You can sell anything with the right branding and accompaniments.

Bartenders of the time used some of the same advertising tactics that we use at CleverFunnel, tailoring their marketing of each drink to specific audiences, and appealing to various emotional needs of their patrons. Check out some of the more common drivers behind prohibition era recipes, and the personas to whom they’d appeal:

Celebrity: Named after one of the most famous movie stars in the emerging Hollywood scene, the Mary Pickford was a cute pink drink made to appeal to the trendy pop-culture crowd.
Rum, pineapple juice, grenadine, maraschino cherry

Accessibility: The Jack Rose was made with (relatively) easy to acquire apple brandy and simple ingredients that most people had at home, making it feel accessible and down-to-earth.
Applejack, lemon juice, grenadine

World’s Best: Is your product the best in it’s category? No? Tell ‘em it is, anyway! That’s the premise behind the Bees Knees, a sweet gin cocktail for those who only want the best.
Gin, lemon juice, honey syrup

Edginess: Scofflaw, another old-fashioned term, referred to criminals. As anyone drinking was technically a criminal, this drink was targeted at those who wanted to feel rebellious and laugh in the face of the law.
Bourbon, vermouth, lemon juice, grenadine, bitters

Luke – Startup Lesson #5 – Branding matters.
The catalyst to prohibition, the Temperance movement was the driving force behind the 18th Amendment. If there’s one thing we can learn from the Temperance movement, it’s that your branding has to match the message and the audience. Take a look at the image above, “Lips That Touch Liquor Shall Not Touch Ours”. These painfully sober ladies were actually onto a not-completely-terrible marketing idea: Men like liquor, but they like women more. Thus, if you’re getting faded with some gin & juice, you don’t get none of this milkshake… so to speak. 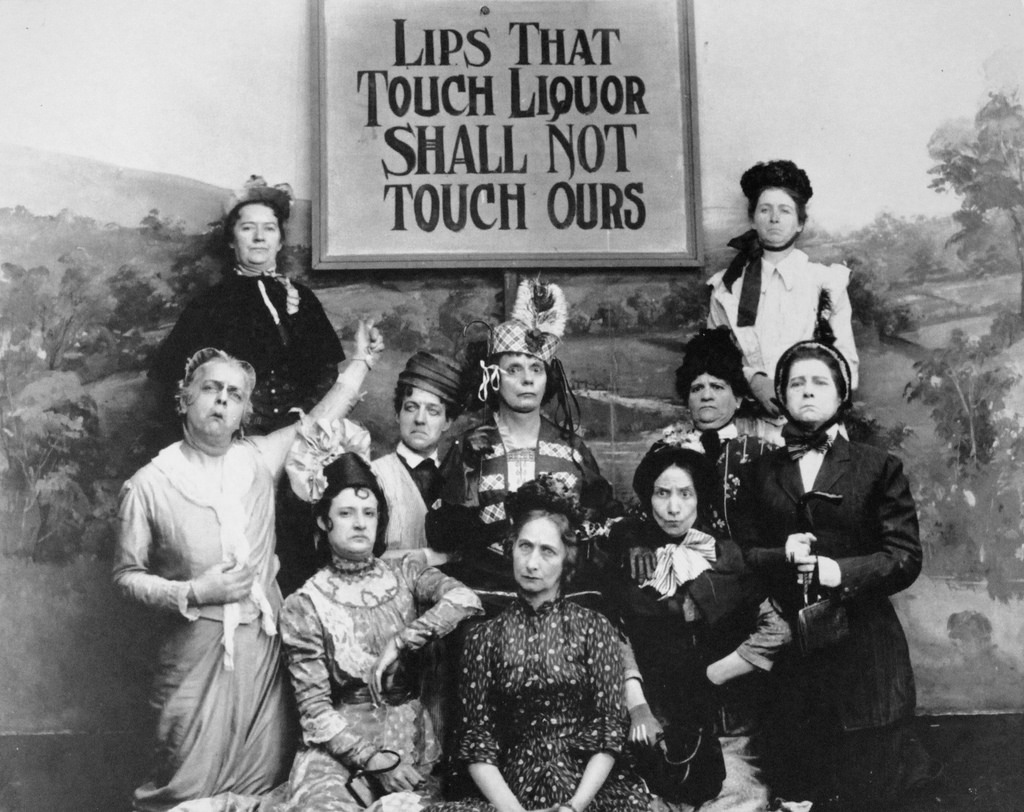 The problem – immediately apparent to anyone familiar with the mainstream preferences of most men – is that nobody wants their lips on a group of angry, prune-faced old fire extinguishers who look like they want to hit you with a wooden spoon. If the inferred payoff (smoochie) from following the message (no-drinky) isn’t something your audience wants (gross old women), it’s not going to work. Imagine today if you saw an anti-smoking ad that said “Girls don’t want to kiss someone who smells like an ashtray”, but had a picture of Madeline Albright wearing a trenchcoat and a menacing scowl. Neither strategy is going to drive anyone away from their vices.

I get it – these teetotalers were probably still bitter from their recent divorces from their alcoholic husbands. Maybe they were so passionate that they believed they could change lives with just a stern look and a clever tagline. The solution is an easy one though: replace Maggie Smith and her knitting club with some beautiful, sultry-looking 20-somethings, you’re gonna make some people seriously consider whether they need that next drink. Sorry if this goes against any feminist ideas, but if you’re going to appeal to men’s more basic instincts, at least do it the right way.

Ivan – Startup Lesson #6. Be Flexible. Be Agile.
America’s drunkest passtime… auto racing would not be possible without prohibition. By the time it was repealed in 1933, drunks everywhere had figured out how to make cars go fast, really fast. It was the 2nd golden age of the outlaw. Rumrunners, bootleggers and gangsters took to fast cars like politicians to lying. They were creative, fast (also murderous, but that’s another story), and willing to change and innovate in order to stay ahead of everyone else. 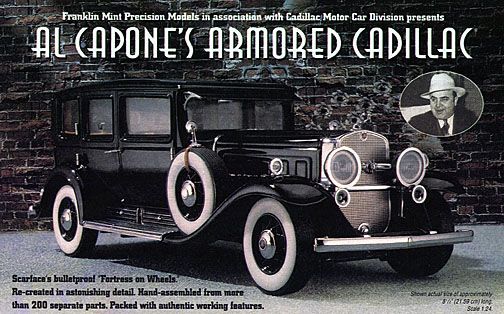 Al Capone took over Chicago’s underworld in this 1928 Cadillac.

The lesson here is be flexible, and embrace change. Startups pride themselves on being the nimble, agile alternative to the corporate giants, but sometimes we fall just as victim to doing things the old way because everyone else is doing it.
If your marketing efforts are one-dimensional or hard to change because of organizational inflexibility, you’ll end up like the cops did in the 20’s, a disappearing dot in the rear view mirror.

I’m already getting zozzled just thinking about all the juice joints I’ll never get to visit because I’m not 120 years old. Horsefeathers! I say!.

BONUS Lesson #7. Alcohol makes people happy. This one is a simple equation. Alcohol = happiness= productivity. America wasted a lot of time, energy and money trying to police something that frankly didn’t need to be policed. Unnecessary decrees can drive away employees, decimate culture and ultimately,  kill a company. 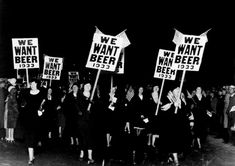 Everyone knows the key to happy employees is a beer keg in the kitchen and ping pong in the break room.

As we tip our glasses tonight to celebrate the day we said farewell errr fuck you to the 18th Amendment, let’s remember the age ‘ol saying that those that don’t learn history, are doomed to repeat repeal it.

Chris is the CEO CleverFunnel CBD. He likes to be outside and to spend time with his friends and family. It’s a bonus if he can do those two things together.
